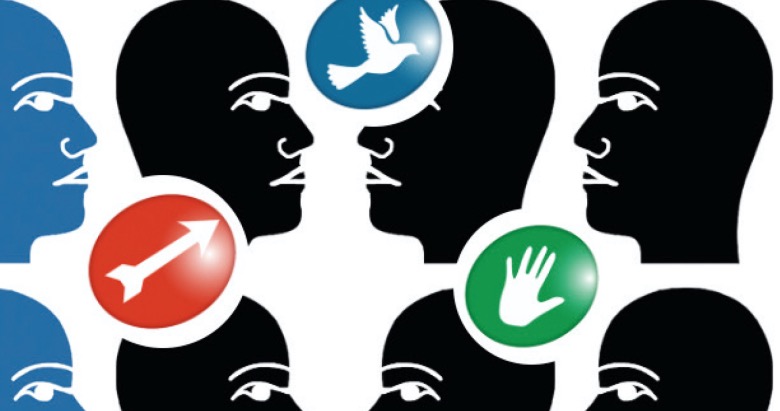 We looked last time at the inherent problem of lack of productivity and suggested that top performing teams were the antidote to this, in that they were almost by definition highly productive. But alongside this problem of creating top performing teams, we identified two others: first, that leading experts and consultancies in the field tended to advocate every buzz word in the lexicon, except motivation as part of the solution. And this was connected to an even deeper problem: the tendency to be static, to preserve the status quo, whilst simultaneously appearing to advocate change. Part of this was to do with the fact that one central change that has to happen is the move from a top-down approach to a bottom-up one, which motivation, correctly approached, does. But, of course, giving up that power – that top-down telling (and telling off!) is hard to renounce.

Anais Nin more generally commented on life that it is ‘… a process of becoming, a combination of states we have to go through. Where people fail is that they wish to elect a state and remain in it. This is a kind of death.’ Top-down management invariably does this: it seeks change whilst simultaneously seeking to preserve things as they are. The poet WH Auden expressed it this way:

We would rather be ruined than changed.

We would rather die in our dread

Than climb the cross of the present

And let our illusions die.

And that – climbing the cross of the present – is what is required. If that sounds too abstract, then let’s boil it down to the simplest type of proposition, and let’s grasp the full import of William Kendall’s smart observation: ‘Building a vibrant company is about forming a good team... You cannot do it on your own ... It is a question of persuading people who are better than you to form a successful team’. People better than you? Ah, there’s the rub. Who can accept that easily in a culture where – as say in programmes like The Apprentice on television – we have to prove we are the best. So this is a psychological or ego issue, and one very similar to the whole thrust of what we have been saying all along: namely, that bottom-up is necessary and better than top-down in terms of long-term results and productivity. But again, psychologically, managers and leaders seem unable to let go of the need to ‘control’ their people.

But let’s add another layer to this analysis. For when it comes to teams, as well as individuals, we need to consider rewards. This is an easy to understand concept because it is soft-wired (if not hard-wired) into us from childhood onwards. If we perform, then we get prizes: be a good boy or be a good girl, and we get the ice cream or material reward; but even more important is the immaterial rewards we accumulate – acceptance, praise, admiration, support and more besides, including even love. We want – are motivated towards – these rewards. Organisations recognize this and many now have moved well beyond the simple and simplistic idea that paying people money is enough. However, this movement is itself not sufficient, since it tends to be about the WHAT and not the HOW, which is possibly even more important.

So, rewards are, on the one hand, a content – somebody receives ‘something’, which is a WHAT (for example, a pay bonus, a trip to the Caribbean, time off, and so on) - but also, critically, it is a process: the employee is handled in a specific way, and HOW this is done is crucial. Naturally, and as one would expect, most organisations spend most of their time focusing on arguably the less important of these two elements of rewards: the content. Content – the WHAT – is easy: make a list and dish out the goodies! Who wants to spend a lot of time thinking about it? But of course it is HOW we reward people that is more fundamental, and this does take some thinking about. And isn’t that obvious? The best gift in the world to one’s life partner left unwrapped and casually lying around will usually have less impact than a much more moderate gift – but carefully thought through and based on an understanding of the desires of the recipient – carefully and beautifully packaged, and presented at exactly the right psychological moment.

Moreover, a moment’s thought about what motivates us in our dealings with other people reveals that we prefer rewards that are: 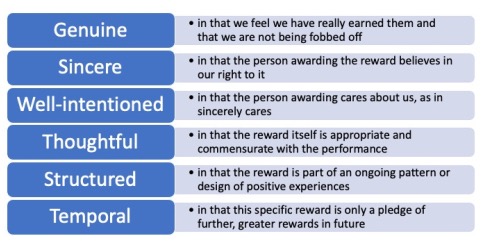 Any team leader, then, needs to ask themselves whether they are genuine, sincere, well-intentioned, thoughtful, structured and temporal in their approach to rewarding and dealing with their team members. And it would appear that these qualities need to be established at the recruitment or interviewing stage of any appointment. Of course, there is no use asking anyone at interview: ‘Are you sincere’ or ‘Are you genuine’ because the answer will be ‘Yes’! But the fact is, past behavior is a good, though not infallible, indicator of whether these things are so.

From these deliberations, then, it should be clear as to why I had to write Mapping Motivation for Top Performing Teams for Routledge for this is literally the antidote to all such thinking and pretence. In particular chapter 6, Interdependency and Motivation, has an awful lot to say about successful recruiting, and provides a useful motivational toolkit to help that process happen.

In my next blog I shall explore this further, but for the full exploration of this topic go to my book, also available on Amazon.