Interview with a BP #8: Paul Ward

‘What I found that was really interesting is that meeting a potential client for a coffee, without the Map, and trying to get them to go in for some coaching work with me, that was challenging. But if I mapped them, then sat down with them and had a conversation, I was far more likely to enter a coaching relationship with them.’

Becoming a Business Practitioner is a big step, but the rewards are also tremendous. We wanted to speak with our BPs and get a sense of what they felt the biggest challenges and rewards of being a BP were, as well as foreground the amazing work they do. This interview with Paul Ward is our eighth instalment, revealing the secrets of life as a BP and the incredible difference they make in the Maps community and beyond. 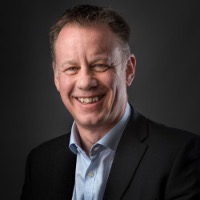 Paul Ward is an International Executive Coach working with Business Owners and senior managers. He is the Founder of Solace Coaching, a qualified trainer of NLP, and Business Practitioner of Motivational Maps.

When I asked Paul what his top motivators are, his response intrigued me: ‘I recall the first Map that I completed.’ I found this to be an unusual way to approach the question of what his top motivators were. It shows how important, and powerful, tracing the narrative of our motivational profile – and hence our shifting priorities and energy levels – can be. As a coach, he is used to seeing those journeys in his clients. ‘Though I can’t remember the specific order, I do remember it was when I was doing my NLP Practitioner week. It was a bit of a “dark time”. I was between jobs, in a sense. I’d taken up a role when I met Bevis and started up this journey, that promised riches and glory, and that was selling double-glazing! They were telling me it’s this easy: You read a script, turn up at their door, read another script, then take their money from them. But I realised (a) I really didn’t enjoy doing it and (b) I was particularly poor at it. It was that thing that the Maps often reveals: the role doesn’t interest me, it pushes against my values. I wanted to help people not rip them off. So, though I don’t remember the order, I remember I was something like 21% motivated! To be honest, you didn’t have to be a specialist to look at me and say “That guy’s not motivated”, but it was a nice clear evidence of what was going on with me. In terms of my profile now, Searcher is always at the top. Spirit usually second or third. And most recently, and this keeps coming in and coming out of the top three, is Expert. Depending on where I am and what I’m doing!’

I remarked that this profile is probably ideal for his current role as a coach and trainer. He works for himself, which feeds independent (Spirit); he gets to demonstrate and pass on knowledge to the people he is training (Expert); and he makes a different to people by empowering them with skills (Searcher). However, Paul observed that the fascinating thing about the Maps today are the ‘completely different backgrounds and industries coming to the Maps. For example, if you’re a Personal Trainer, you know everyone comes to you saying: “I want to lose weight. I want to eat healthy.” So, you give them a routine, and they don’t stick to it. But if you have the inside knowledge if what motivates them and the NLP tools, you can then deliver something to your client and they stick to it.’

There are so many unconventional applications of the Maps emerging, which is really exciting. Whilst the Maps tend to be thought of as a recruitment and retention tool, the possibilities are almost endless in terms of how they can be integrated into a myriad of people-processes. Thinking about how people-focused they are, I wondered whether NLP was a big part of the Maps process for Paul:

‘For me personally, yes. When I first met Bevis (on the Senior Practitioner team), eight years ago now, he and I were discussing NLP. That’s what brought us both together first of all. We met at a networking-type event. His first email after that event was talking about NLP, but it also had a link to complete a Motivational Map! So, I went around to his office, which back then was just at his house, and he laid out these cards in front of me with the Nine Motivators on them while he was making me a coffee! He asked me, before I’d seen my Maps profile, where I thought my motivators were. Although I’d started out with the intention of developing my NLP, I trained in the Maps at the same time, and the two have always been hand in hand right from the beginning.’

Paul outlined how the questioning-style of Neurolinguistic Programming allowed for deeper insight when looking at Maps profiles: ‘I was talking to someone this week, a client down in London, who has recently done her NLP training. She works in the restaurant business, so has a high turnover of staff. She was talking to me about the possibility of using Maps in the organisation, but not me doing it. She wanted to train in the Maps and run them herself. She was asking whether she thought the NLP would help with the Maps and I said: “Absolutely, it will enhance the Maps, because the fact you have your NLP practitioner skills, this different style of questioning, will make feedback far more powerful.” I expect we’ll have Maps in a restaurant in London very soon!’

I remarked that hospitality, and particularly restaurants, are a very demotivating environment. I myself worked in a call centre for several years, answering one-hundred and fifty phone calls a day. ‘Keeping somebody motivated when they’re serving the general public can be a challenge, put it that way!’ Paul said. ‘I can really relate. Because I worked in the retail industry, which has a similar problem. You always seemed to have two extremes in the core team: the people who had been there fifteen years and it was just a part-time job for them. Or, you’d have people, sixteen years old to early-twenties, for whom it was just beer money. I was one of those when I started!’ It seems to me that hospitality, customer service, and retail are an untapped reservoir for Mappers. With growing dis-engagement in the workplace, and a desperate need to motivate and retain people, there could be a burgeoning opportunity here.

I asked how Paul transitioned from holding down a day job, to a fully fledged Business Practitioner with Maps. ‘When I first started with Maps, I was a bit of a slow burner at first. I was still working in the retail environment. I was working as an Area Manager for a charity. I was using Maps within my organisation, to help me understand my team better. Because I was still employed, and not a coach, I only used them here and there. It took me a long time to transition from a Licensed Practitioner of Maps, using them once in a while, to signing up for a Business Practitionership and using more Maps. But what I found that was really interesting is that meeting a potential client for a coffee, without the Map, and trying to get them to go in for some coaching work with me, that was challenging. But if I mapped them, then sat down with them and had a conversation, I was far more likely to enter a coaching relationship with them. Funnily enough! So that became my go-to method of engaging with potential clients.’

I asked whether he was interested in taking on larger-scale projects.

‘I went on a bit of a different tangent to a lot of associates I know who use the Maps. I still, to this day, only really use Maps one-to-one. I don’t tend to do the big projects. Groups of no bigger than usually ten is what I’m used to. Mostly what I use Maps for is as a doorway into coaching. That’s what led me to discuss with Bevis the option of transitioning to a BP. I was networking with a lot of coaches, consultants and HR managers, and telling them about the Maps and how great they are and how I use them, and mapping them – so they received and understood the benefit of a Map – but they were not turning into coaching clients. I asked myself what I could do: these people would really benefit from using Maps themselves. So therefore it seemed an obvious transition for me to step into a BP for me to develop, promote, push Licensed Practitioners of my own.’

I observed that this allowed Paul to maintain his one-to-one focus, but still grow his business. ‘I’ve been very focused on who I am, my presence as a trainer, as a facilitator. I take this role quite seriously. I’m passing information on, so I need to know my stuff!’

You can find out more about the work Paul does by heading over to Solace Coaching.

I read your motivational memos story that is really very informative.

Glad you liked it Reese - thanks for the comment. Paul Ward is a fabulous coach.