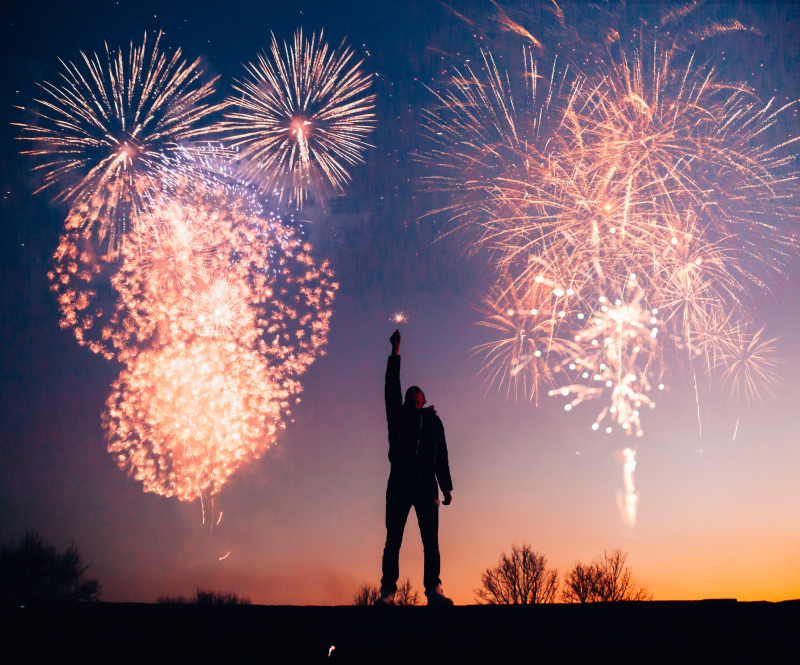 I hope that everyone has had celebratory New Year’s Eves full of life and laughter! I hope, too, that the morning, whilst possibly bringing a hangover, has also brought the promise of an exciting year ahead. Whilst Time is certainly an artificial device, something we use to measure out life, we derive our measurement of Time from the natural cycles in the world. The rotation of the Earth about the sun. The procession of the Equinoxes. The wax and wane of the Moon. So, it is important, regardless of our views, to mark time, transition, to acknowledge the moment where one thing becomes another: spring becoming summer, one day becoming the next, one year becoming the another. Whilst some people might say that nothing has changed with the advent of a new year, I disagree. Everything may have changed, even if it is only our perspective. This reminds me of a story I may have told before, but it’s an important one, so I want to re-iterate it. I think, if anything, it is more pertinent now than when I first told it.

There is so much to learn from children, if only we could listen. Of course, one needs to be clear: there is a world of difference between being child-like and childish. We need to avoid the latter and embrace the former. One way I have come to appreciate this is through my own son when he was young. I vividly remember when he was about six years old and I was encouraging him to do the homework his Primary school had set him to do (yes, unbelievable, I know – what are these people on?) and he turned to me, disarmingly, and said: “Daddy, children were meant to play.” As soon as he said it – like a blow to my heart – I knew he was right. What was I thinking? That at six years old he should spend all day at school and then come home in the evening and start toiling over a load of nonsense that had no bearing on his life whatsoever?

“Carry on playing, Joe,” I said, and quietly crept away, ashamed I had disturbed him. And before then and after then, my son had a knack of identifying the real issue without thinking about it, and without being a smarty-pants. But one of his best perceptions only emerged gradually. My wife and I noticed a pattern when we asked him a familiar family question. For example, he had been to visit a friend, or he just had been to his martial arts club, or had a special meal, or we’d come back from going to the cinema with him or even watched a DVD at home. This typical question always went along the lines of: “How was it Joe?” – how was the visit to your friend, or the martial arts club, or the meal, or the film? And we kept getting this unselfconscious response: “Best ever.” Indeed, this response became a bit of a family joke and persisted into the present time: “How was your date with your girlfriend?”

And I realised this was fundamentally important. So many people look back to the best ever time of their life, and then spend all their time regretting how this could not continue. The truth is, of course, no matter how old we are, we are now at the best ever moment of our life, and the next moment is going to be even better. This is a vital expectation for our lives, for without it we are going to subscribe to the zeitgeist philosophy that being old is bad, decrepitude is inevitable, and that only being young is worthwhile. On the contrary, being old has massive advantages and things are even better – ‘best ever’ – now than they were before. Expectations are, of course, our beliefs about future outcomes, and so a belief that is so positive, so pregnant with energy, so vital, is going to have a massive effect in exactly the way that self-fulfilling prophecies do. In other words, it is highly likely to become our reality, if we believe it and not just ‘think’ it.

Certainly, for me, I realise that I am at the very best time of my life now. Eight years ago I nearly died of cancer, but that was best ever too: best ever illness that enabled me to move on from where I was utterly stuck. Every year since has got ‘best ever’ written all over it too. So as we all face 2019 what are we thinking, or rather believing? Is this going to be your ‘best ever’ year? Or are you already resigned to mediocrity, more of the same, or worse: a gradual deterioration in everything – health, wealth, relationships and the self? Do yourself a favour, then: take advice from my son, and from children and from the child-like everywhere, and whenever asked ‘how’s it going?’, reply: ‘best ever, thanks’.