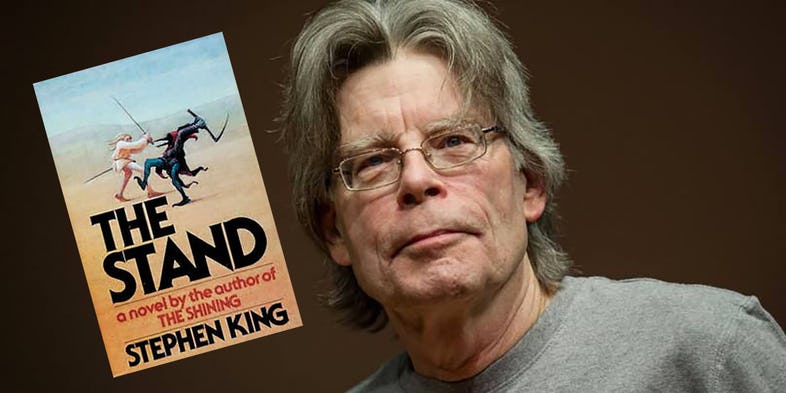 In the modern world, there is, more than there ever was before, a drive to constantly achieve new things and get to the next stage of ‘life’ and ‘success’. This can manifest in all kinds of ways: sometimes it is material, in that we want the next car or promotion or house; sometimes it is creative, in that we rush from one project to the next without pausing to reflect on the achievement of having completed the first one. Creative people are especially vulnerable to this. They disregard their own back catalogue of triumphs. How many times have you heard a creative person say: ‘Oh, that’s my old stuff. You should check out my new projects, they’re much better!’

Stephen King once joked that ‘As far as my fans are concerned, I might as well have died after I wrote The Stand.’ But the thing is, that book was and remains a remarkable achievement, and while he has gone on to complete 0ther, arguably equally remarkable works, it’s not shameful to be associated with an iconic former triumph. Of course, the other side of this are the ‘has-beens’, people who live off of former achievements without feeling the need to contribute anything new. Many creative people are paranoid about morphing into these parasitical individuals, and hence push themselves even harder to get to their next endeavour.

So, in the light of this and the upcoming release of my second motivation book: Mapping: Motivation for Coaching, co-written with Bevis Moynan, and now available from here (and for a 20% discount enter the code: FLR40 at checkout), I decided to revisit some all important lessons from my previous book, Mapping Motivation. Here are three personal development tools, explored in detail in the book, that you can use to inform your motivational practice. The thing about revisiting old material is that, hopefully, good things remain relevant for a long time, sometimes even forever. The bad stuff, you can leave behind.

Mapping Motivation has a chapter on Leadership which provides a new model that has, at the heart of it, the surprising fact that motivation and the ability to motivate others is at least 50% of what a leader is required to do. This is counter-intuitive and not what we expect; and not what most other models claim is the essence of effective leadership. The model is called the '4+1 Model' and I direct you to Chapter 8 of the book to get a full account of it, but for now trust me if I say that the '1' of the '4+1' model is all about personal development and growth, and that without this growth, the leader cannot function well even if they have the other necessary skills (the '4'). So how do we grow as people, as leaders?

All growth and personal development begins with self-awareness: the self being aware of itself, becoming aware of dissatisfaction with its self, and projecting, therefore, changes that will enable it to ‘improve’. In other words, to engage in a creative process with itself. There are three primary and creative tools of personal development that follow from this self-awareness.

One, desire itself: seeing our own condition we desire to improve, rectify, and enhance it. Desire is not motivation but it precedes it. The consequence of this, then, is that our emotions are vital to our development, and are not playing some subordinate role to our thought and logical processes. It is desire at its intensest level that leads in most situations to the solving of the most pressing problems that we encounter, including our own problem!

Two, imagination: the self produces images that begin a process of manifestation. The etymology of the word manifestation is from the Latin for “hand” - we can ‘handle’ thoughts via manifestation. Manifestation, then, is the process by which material reality comes into existence as a concretization of what the mind has ‘seen’, or, if you will, 'pre-seen'. (There is a wonderful story about Roy Disney, who after his father's death, and the opening of Disney Land, had some sympathiser murmuring: 'If only your father had lived to see this'. To which he replied: 'But he did see it and that's why you’re seeing it now'.) Hence, it is too that we find that the visible things depend upon the invisible things for their existence. There is a wonderful line from the Ancient Egyptian Book of the Dead which expresses this: “All the world which lies below has been set in order and filled in contents by the things which are placed above; for the things below have not the power to set in order the world above”.

Three, expectations: our beliefs in future outcomes, or in short, faith. What we believe, especially about the future, has an inordinate effect upon that future and upon the outcomes (of life) for us. So much so, our belief – faith – may be considered a self-fulfilling prophecy.

Meditation is the process and the objective by which self-awareness is maximized. This leads to the interesting reflection that altered brain wave patterns – not the everyday beta brain way patterns (which are in the range of about 13-40 Hz) - are intimately connected with developing self-awareness. Deepak Chopra made the profound observation that: “It is possible to spend a lifetime listening to the inventory of the mind without ever dipping into its source”. Clearly, any leader in this non-creative state is likely to be (a) highly ineffective, and (b) ego-driven, with all the terrible consequences that implies.

Two corollaries, then, of this are: first, relaxation is therefore essential not only to human development but human happiness too. Secondly, the ultimate relaxation is in sleep, and sleep itself requires both the non-being (as it were) state of non-consciousness AND the dream state. In fact, the dream state is every bit as essential as the non-conscious state. Why? Possibly because dreams themselves, remembered or otherwise, are primary agents shaping our desires, imagination and expectations. Bizarrely, then, the real changes we want in our life, and even the fact we want them, derive from the invisible, intangible, insubstantial and nebulous world within us.

If we want to be leaders, then, we need to pay attention - much like Sherlock Holmes - not to the obvious details of everyday life, but more intently to the small creative things that have in the longer term such a huge impact on reality.

Tune in next week for another webseries blog on the need for productivity.